We had one big adventure left for our trip. Aoraki (Mt. Cook) was on our itinerary and, if you remember, we had a helicopter flight over the glacier with the landing on the snow rescheduled for this day.

As I laid in bed the night before, I’ve heard my friends discussing the weather forecast. It wasn’t promising: snow, and cold, and icy roads. Valda, who was our driver for the entire trip, was talking about her taking a longer route that would avoid driving on mountainous roads and tire chains if the roads are dangerously icy. It didn’t sound good.

Next morning it was very windy but sunny. We were afraid it would change when we drive away from the ocean to the depth of the South Island, until we get to the Southern Alps. Southern Alps’ peaks are always covered with snow and Maori name for New Zealand Aotearoa, often translated as “land of the long white cloud” may possibly refer to the snow covered mountains.

Firs of all we drove by the shore to Moeraki Boulders.

These boulders are actually concretions that have been exposed through shoreline erosion from coastal cliffs. Even today, there are still boulders remaining in the mudstone that will, eventually, fall on to the beach as they come lose due to erosion. 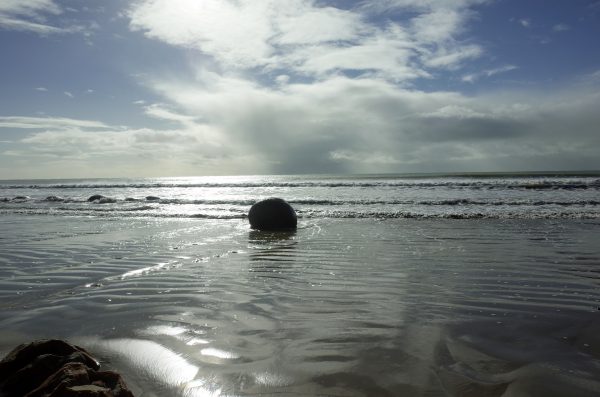 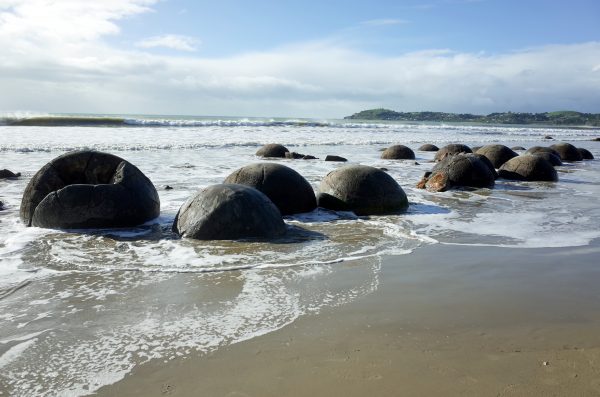 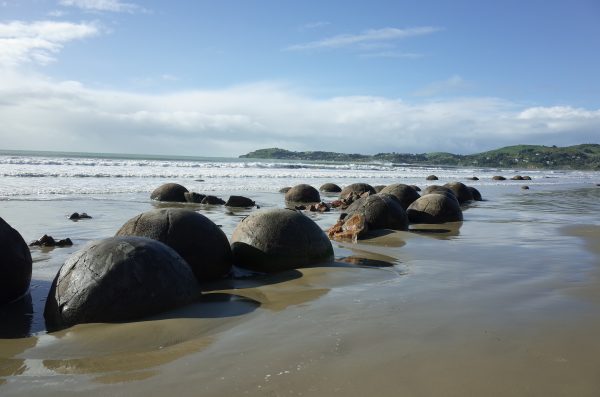 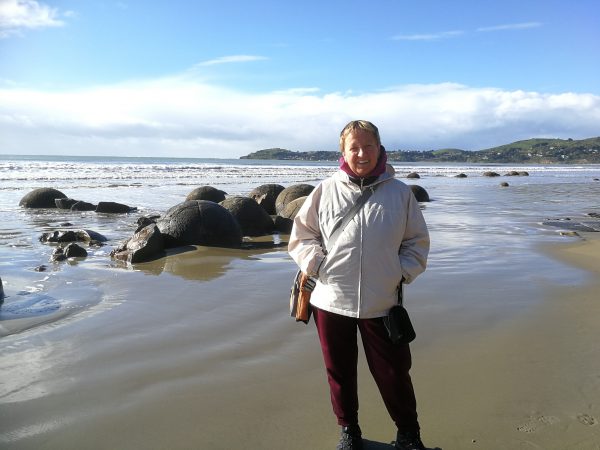 As we were driving North West, there were no signs of snow or ice. The road was clear and the lakes by the road were amazingly blue: 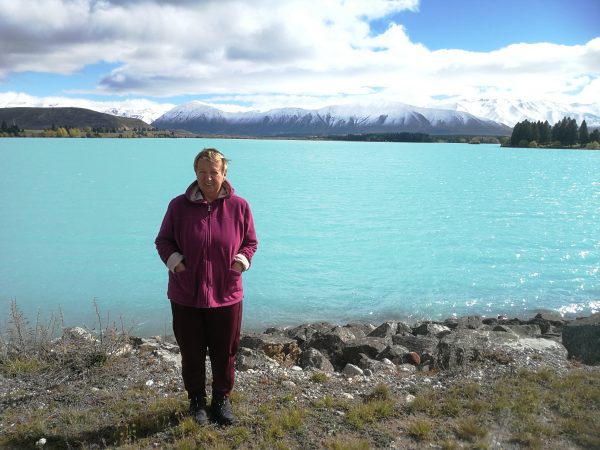 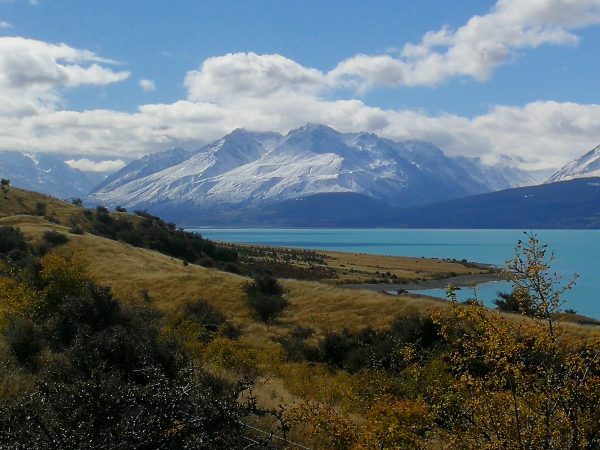 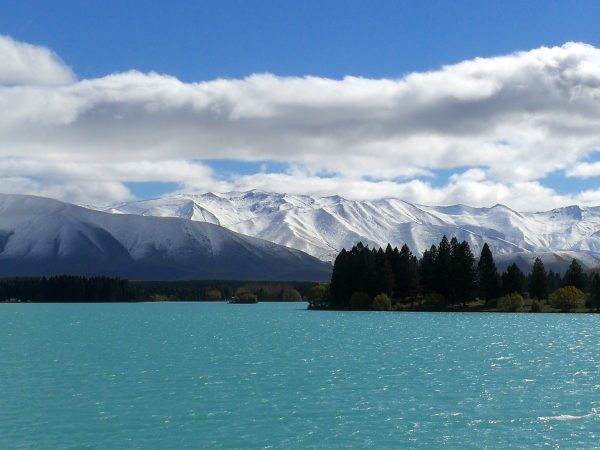 Finally we arrived to the spot where the helicopter was waiting for us: 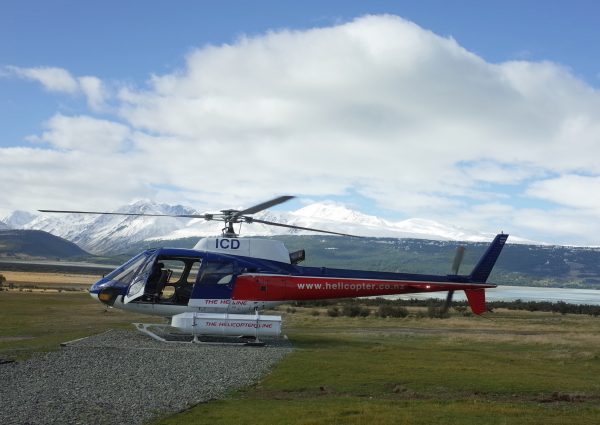 We were told we would fly! I have never flown the helicopter before and I thought I would never sign for that kind of an adventure. But I did!

Pretty soon the helicopter took off and the views of mountains around us were amazing: 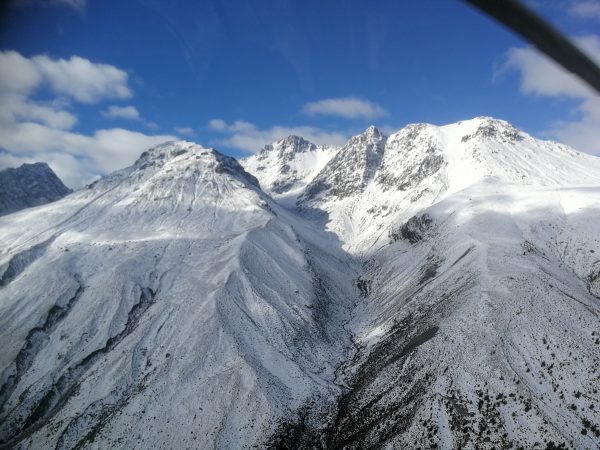 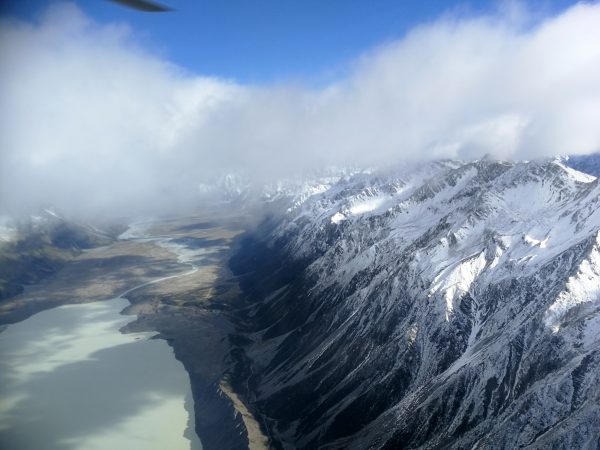 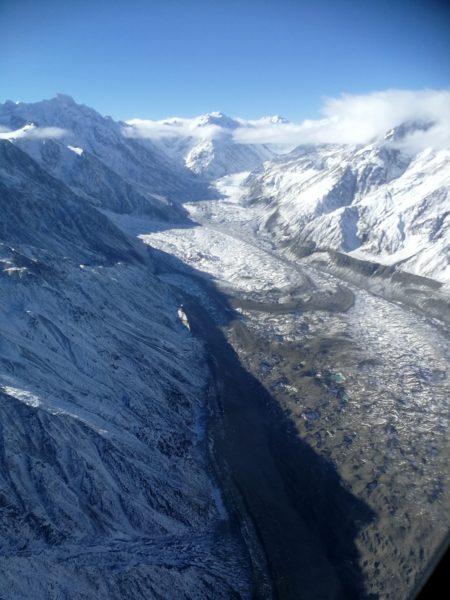 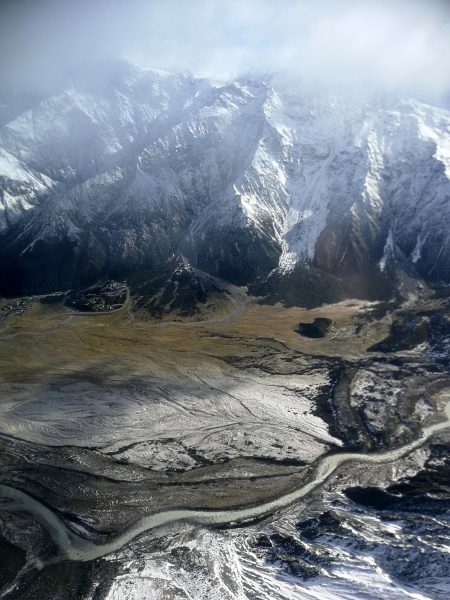 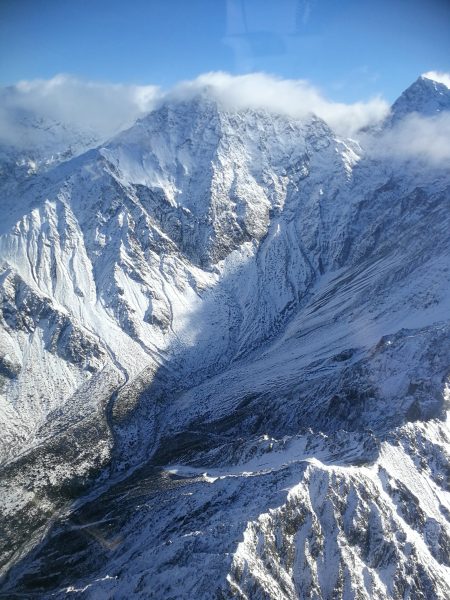 Finally the helicopter landed on the snow: 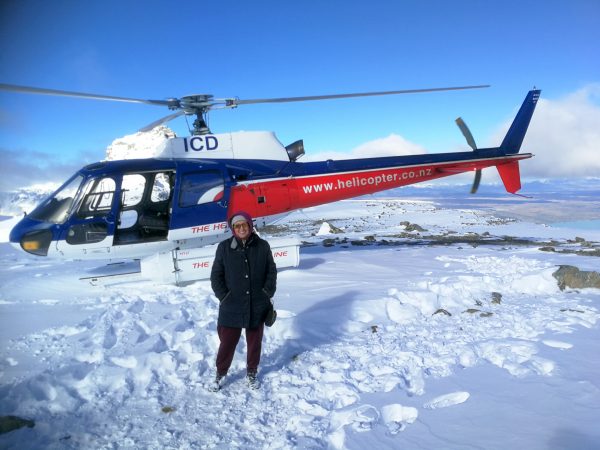 We could see Mt. Cook:

It was a big relief when the helicopter finally landed. Then we drove closer to Mt. Cook and because the day was so beautiful, we were able to see Mt. Cook  in all it’s glory:

We  drove even closer, to Mt. Cook village, where we got another view of Mt. Cook:

Then we hurried to our motel on the shore of Lake Tekapo.  The sun was still shining and skies were getting completely clear. No clouds, no snow, and no ice.

We were not done with our itinerary yet. One more amazing adventure was awaiting and the very clear sky and no moon was what we desired. Late at night we  were going on a tour to Mount John observatory. An area of 430,000 hectares (1,700 sq mi) around the observatory was declared as the Aoraki Mackenzie International Dark Sky Reserve by the International Dark-Sky Association, one of only four such reserves around the world. The area has a Bortle Scale of 2.

We were not allowed to use any white light, we were given red flash lights to help us to walk in the dark. The bus that took us to the observatory didn’t use normal lights as well. We thought the driver possibly used night vision device to drive us there. We were told to dress really warm and on top of our own coats we were given true Antarctic coats.

We were thrilled by the chance of looking deep into the cosmos with  powerful telescopes. We saw Jupiter with it’s four moons. We were shown constellations of the Southern sky, especially Southern Cross and Magellan clouds.

The only photo I have from this tour is one, taken by the photographer Igor Hoogerwerf at the observatory. Because it was taken in a complete dark, we had to keep our smiles still for 15 seconds:

After that our busy day was over and we hurried to get some sleep and get ready for the last day on the road.
Previous Post: « Te Anau to Dunedin
Next Post: Bye bye, New Zealand! » 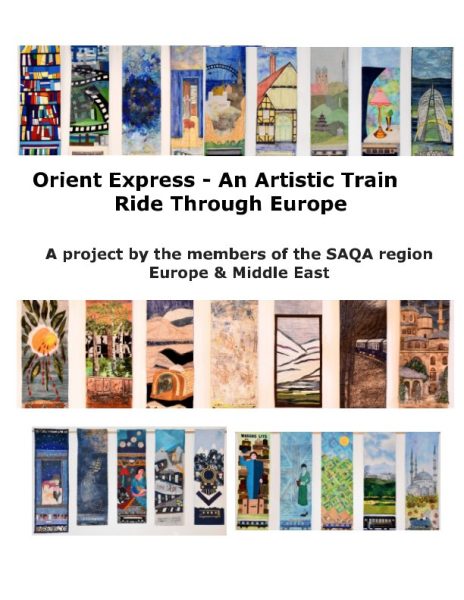 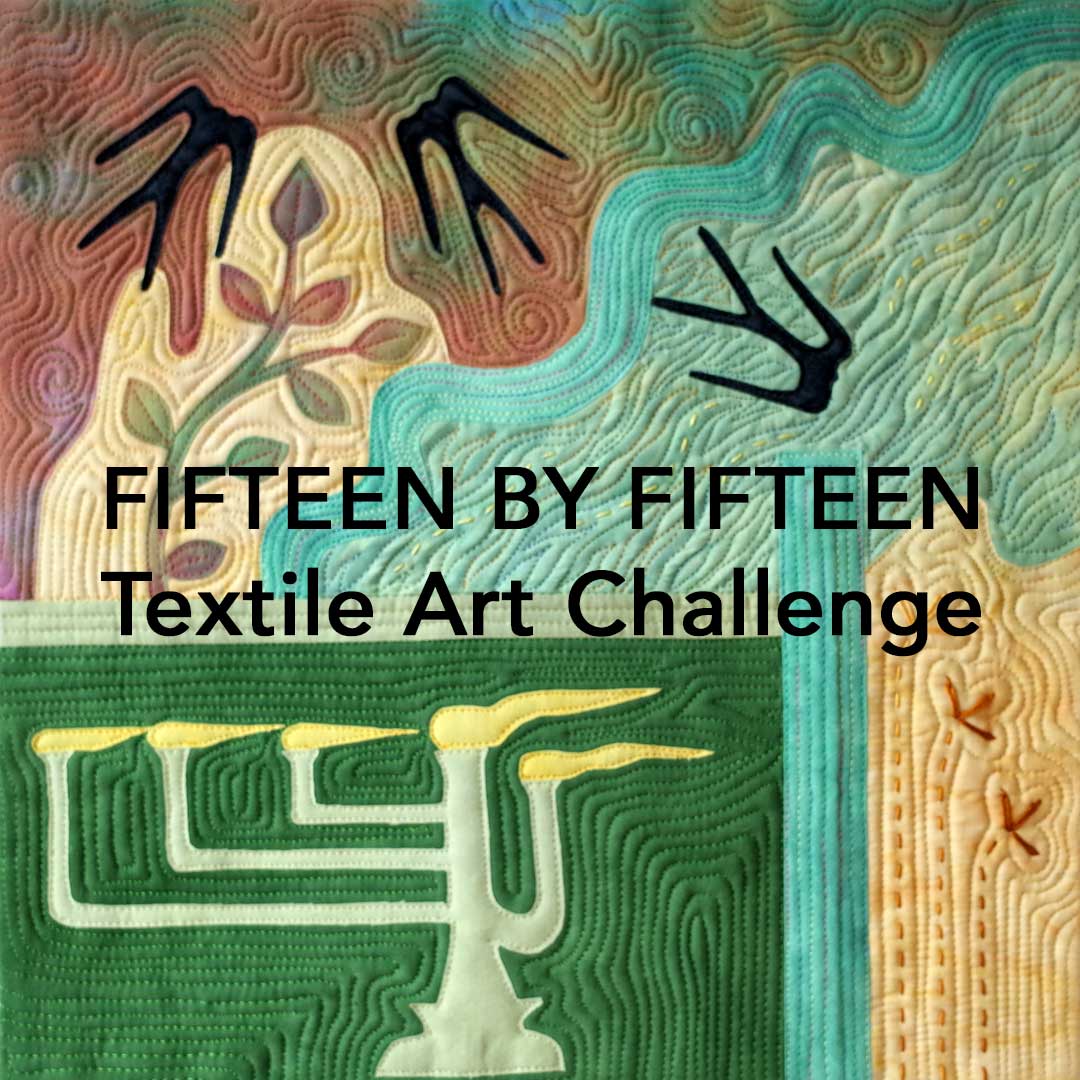 This is my little world right now #southtyrol