We loved that all place-names were in Maori, they haven’t been changed to English, except the modern cities that were founded and build after English people arrived.

Punakaiki are famous by Pancake Rocks. The Pancake Rocks are a heavily eroded limestone area where the sea bursts through several vertical blowholes during high tides. We arrived there just in time when the tide was high.

First of all we had to walk through some wooded area with strange palms: 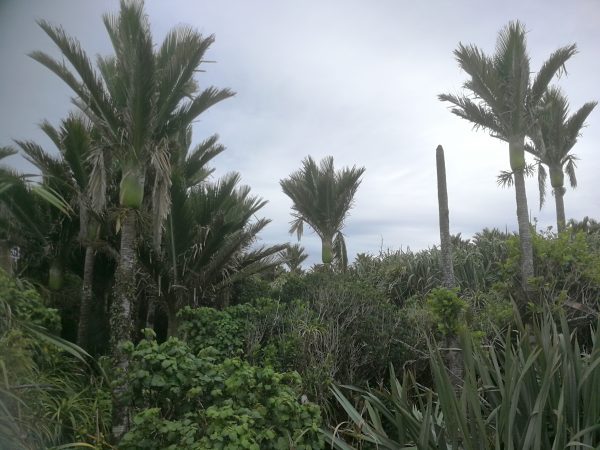 Again- my favorite cabbage trees. Polynesian people used them to make anchor ropes, fishing lines, baskets, waterproof rain capes and cloaks, and sandals.  Early settlers having used the young leaves as a substitute for cabbage and we were told that Captain Cook himself named them ”cabbage tree” because their smell and taste reminded him cabbage:

New Zealand’s flax that Polynesian people used to make their skirts from:

All stages of silver ferns and fern trees: 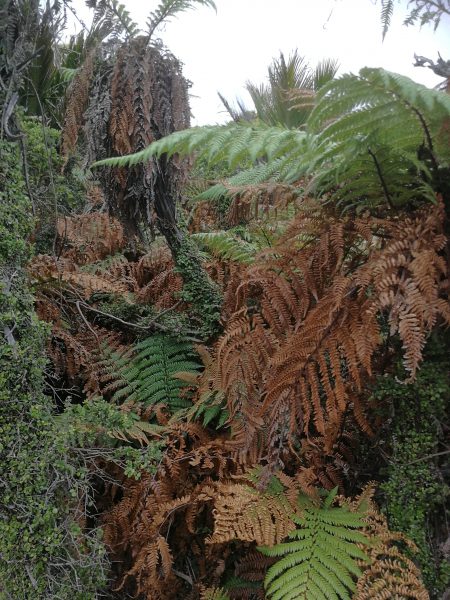 Finally we got to the shore, all filled with fantastic rocks. Limestone is heavily eroded and rocks look like stacked pancakes: 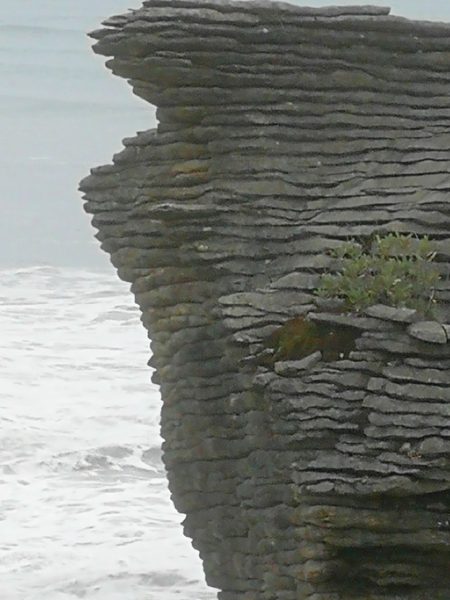 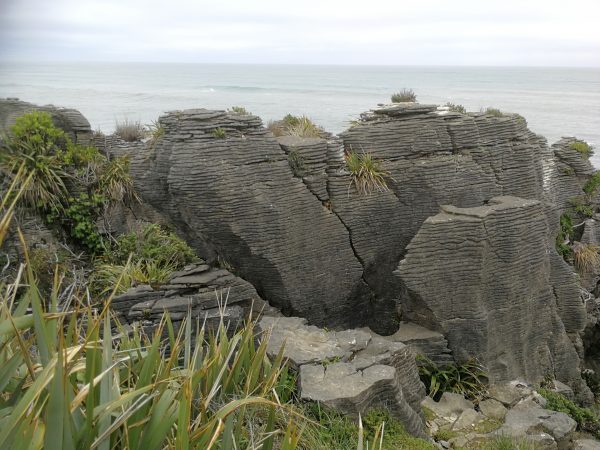 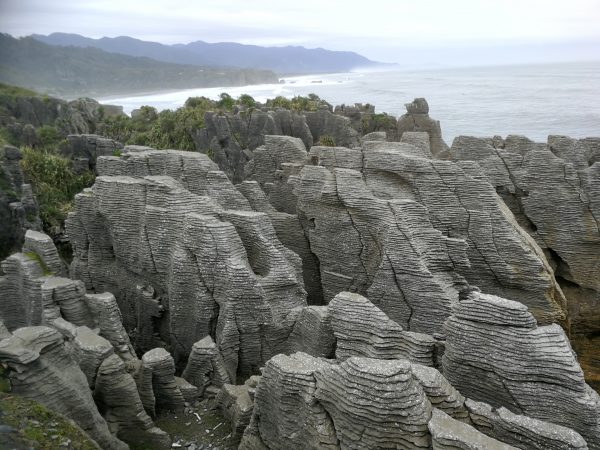 Once in a while we would see water blowing through the hole from beneath of rocks:

After we left Punakaiki, we stopped and walked on the Tasmanian Sea shore. The day was clouded and very windy and the sea didn’t look friendly at all.

We drove South on the West shore of the South Island and stopped to visit Shantytown Heritage  Park. It is a living history in a recreated gold-rush village. We took a steam train ride and visited some of museums. They had rich collections of gold-rush time objects. 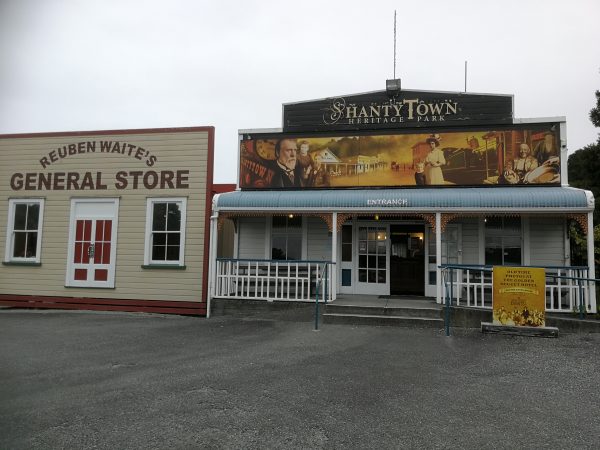 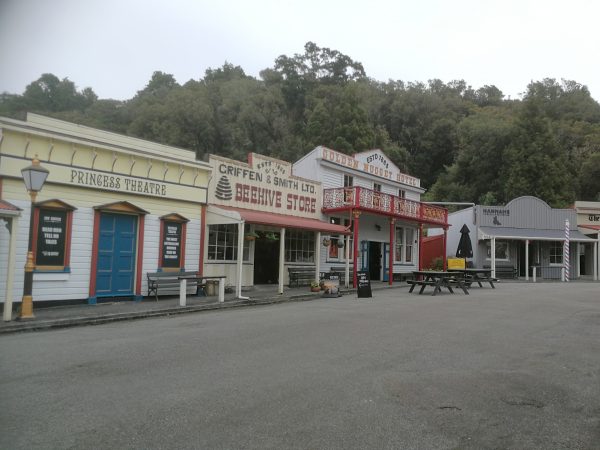 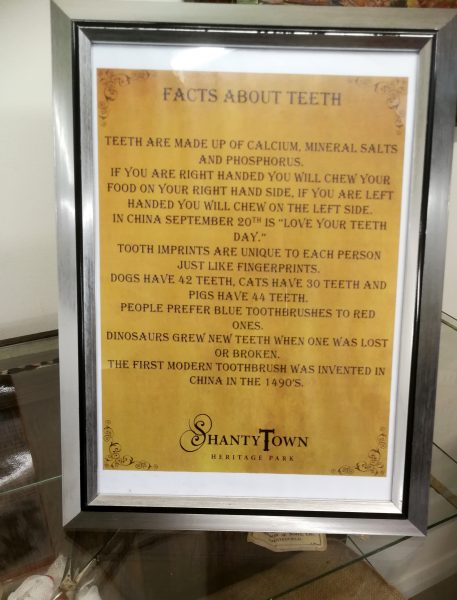 Then  we  drove even  more South. First we had to cross a river driving over the bridge, designed to be used by cars and by trains:

Finally we  arrived to Hokitika

That’s where we were staying overnight. We didn’t see much of Hokitika nor visited many shops but one was rather interesting: 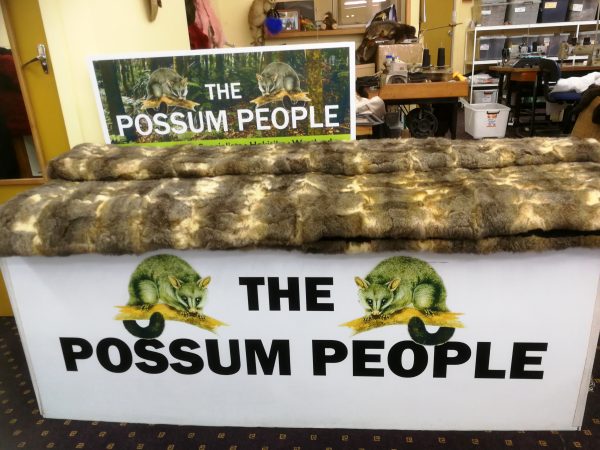 We learned that possums, who are not native to New Zealand, do a lot if harm to local birds.

As I said, the weather didn’t allow us to be outside. It was raining heavily, at some point there was a thunderstorm as well. Girls drove to the town to get some food for our dinner. They came back with an awesome catch. First there were whitebait patties:

Then I was surprised with something wrapped in a local paper:

Valda showed us what to do with that roll:

That’s how we learned that fish and chips originally have been wrapped in a newspaper and some restaurants still do that.

That was a very interesting day, filled with beautiful sites and history lessons. We enjoyed our new way of traveling and our wonderful driver and guide who not only told us about local traditions but showed us things, that many tourists never get to see.

Come back for more, it will get even more interesting.