After leaving Queenstown we had two nights booked in Te Anau. Many tourists come to Te Anau to visit the famous nearby fiord Milford Sound and some other attractions. For the same reason we came to Te Anau as well. Milford Sound is 120 km  North from Te Anau and that’s why we needed two nights there. It was a long drive and long day ahead of us.

Where ever we went we always had a good weather. This time looked like our luck abandoned us. It was raining and was raining hard. We pulled out all our water proof clothes and the closer to Milford Sound we got, the more worried we were.

Our first stop was by Mirror Lakes. On a calm day, the Earl Mountains can be seen reflected in the water. 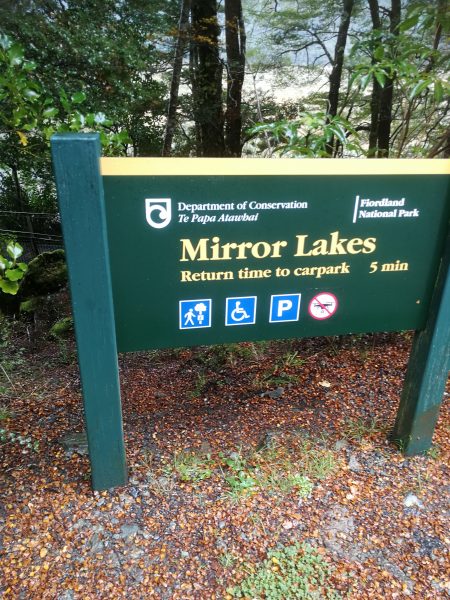 Unfortunately it was raining and the mirror was broken, we could see nothing: 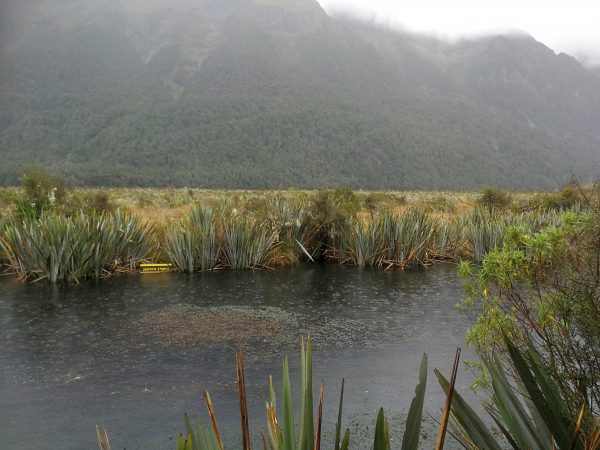 We got to see New Zealand fantail birds flying though:

It was raining all way as we drove through the mountains  and water was running down in multiple waterfalls: 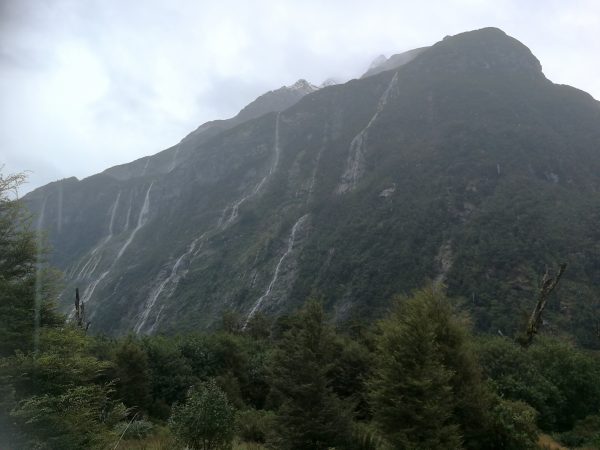 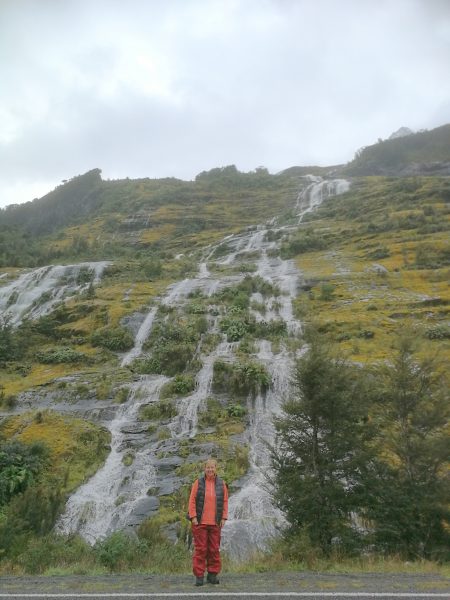 The other stop before getting to Milford Sound was The Chasm. 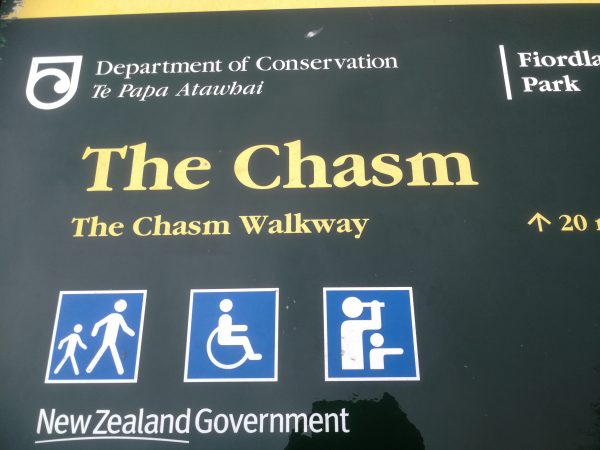 The Chasm is a series of gushing waterfalls but it looks more like a walk through tranquil native forest. The Chasm was formed by the Cleddau River being forced through a narrow rocky valley on its course down from the Darran mountains. As the waters built up, they created thunderous waterfalls. The waterfalls produce a lot of noise and the photos doesn’t reflect the  experience of being there: 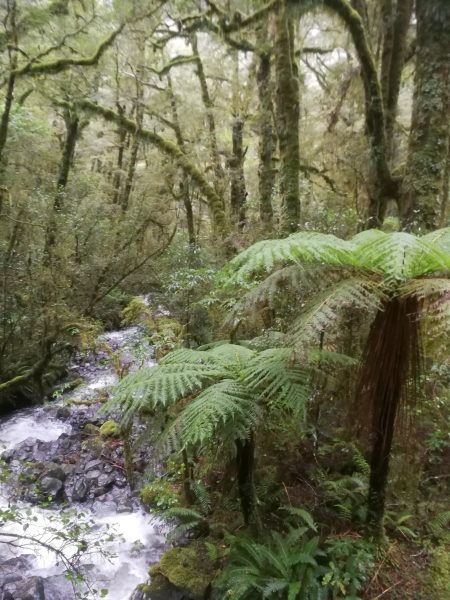 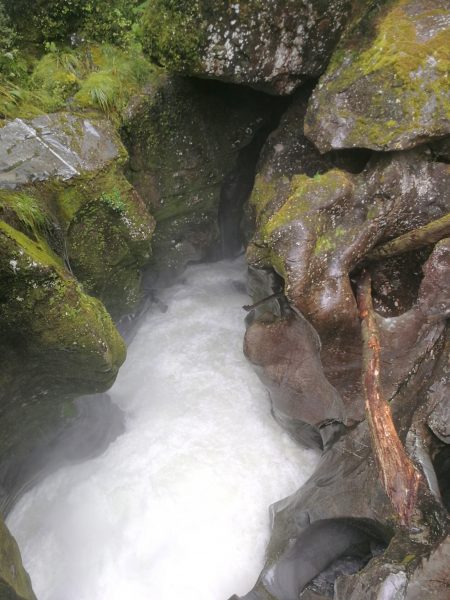 Finally we arrived to Milford Sound where we were going to take a cruise. Our boat was already waiting for us:

We boarded the boat and it was still raining and very windy. We kinda liked the rain because we were told that Milford Sound is pretty in the rain as it fills the waterfalls: 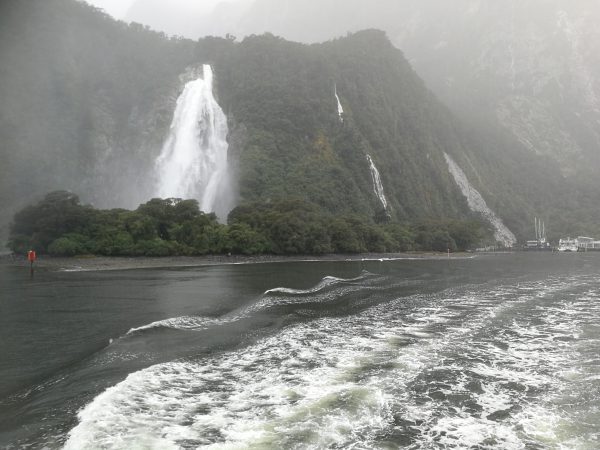 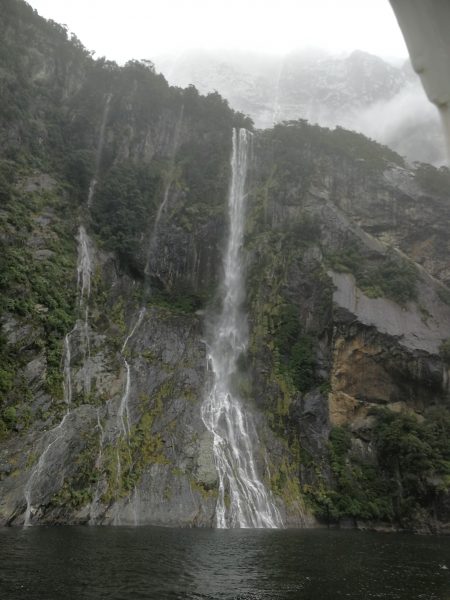 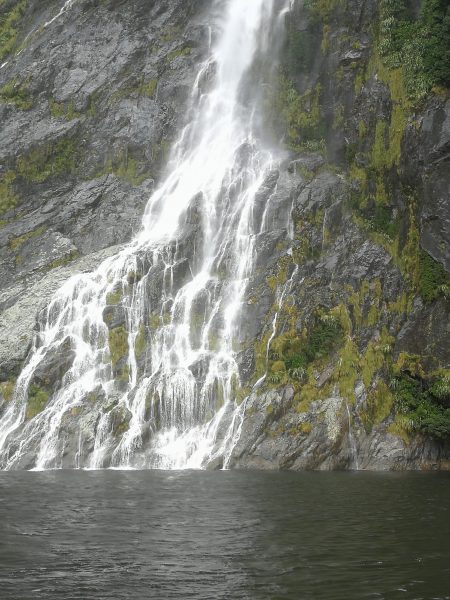 We were surprised by unexpected visitors:

They were getting very close to our boat and even under it: 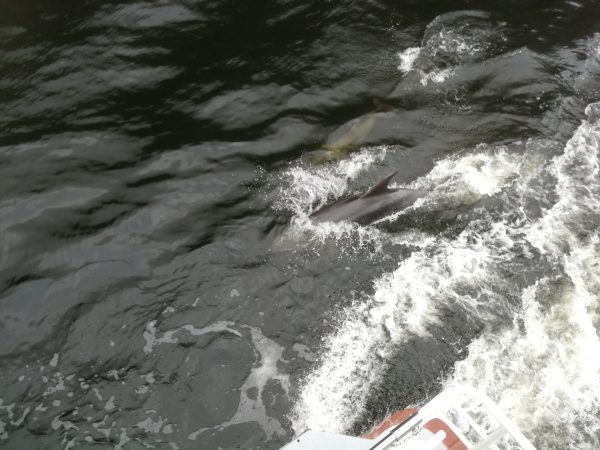 When we got almost to the end of Milford Sound, suddenly the skies got clear and the sun started shining. It shone all way on our way back as well. We got to see Milford Sound in the rain and in the sunshine.  It made us very happy and again, we believed our weather angel was watching over us.

On a way back we stopped and visited Piopioahi- Milford Sound Marine Reserve. It is located about half way  into Milford Sound by one of the rocky shores. There we learned about Milford’s Sound marine life and about special conditions existing there that allow for visitors to see marine life as it unfolds before their eyes.

The special conditions partially are created by the excessive rain in that area. Normally they get about 5 to 7 meters of rainfall a year and on some years up to 9 meters. Milford Sound is not a river but a fiord and  it is filled with salty ocean water. The rain water doesn’t mix fast enough with the salty water and there is a layer of fresh water above of it. It is also muddy and ocean creatures that usually live quite deeply, live their lives much closer to the surface. That’s why after going 60 steps down we could watch the marine life through the windows of a big underwater  container. It felt like we were in an aquarium and all the fishes were looking at us.

After leaving Milford Sound we had a last look at it and the picture was really mysterious:

It didn’t rain anymore.  On a way back we stopped by Mirror Lakes again and this time we ere rewarded:

The day was getting to end soon and we hurried back to Te Anau to sleep and get ready for more adventure tomorrow.