I’ve never thought I would travel far away to Africa and 300 years back in time to The Kingdom of Dahomey. That’s where African country of Benin is now. No, I didn’t travel to there in real but I took this imaginary trip and I hope you will enjoy traveling with me.

It started back in June when I visited my son, who lives in Heidelberg, Germany. His family was moving into recently bought house, and my daughter-in-law showed me what she discovered in a gazebo out in a garden. It was a cloth with some mystical appliques, all faded and torn, with some applique pieces  barely attached to the background that originally was black and now it was light gray. The cloth was hanging in a gazebo providing shade and protecting from winds. It looked more like a rug not a piece of art: 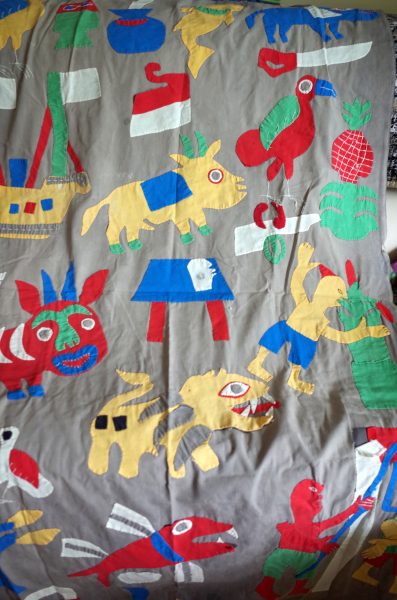 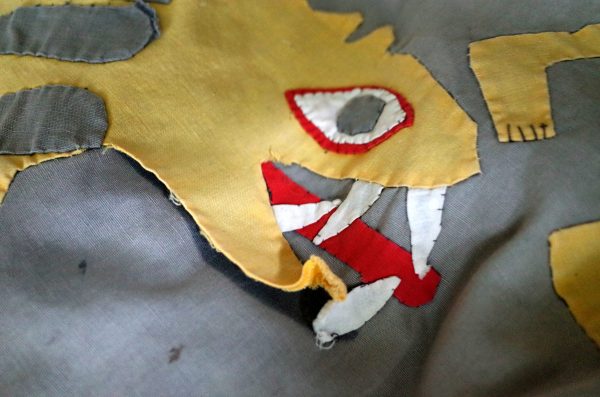 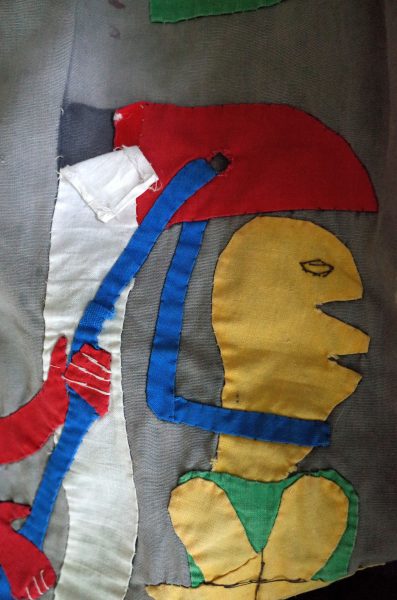 It looked bad but we all were some how fascinated with this piece. I brought it home and started wondering who made it and what those symbols meant.

The applique was sewn with white or black color threads with long stitches. I recalled few years ago going to Chicago where I saw Tentmakers of Cairo working, making there wonderful appliqued pieces using the same long stitches. I googled ”african applique” and that was a hit. The first image that came up was this: 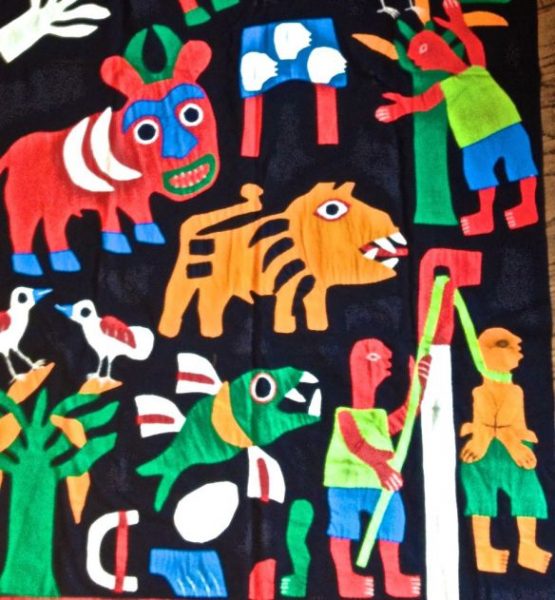 Wow! I knew I was on the right path. But now I faced a dilemma: should I try to restore the piece as close as possible to the original or, as a quilter, should I give it a new life transforming it into a quilt? I also knew this was not an antique piece and didn’t have much value. It was probably 20 or 30 years old. The Kingdom of Dahomey is long gone but in Africa they still make these banners and sell them to  tourists.

I decided to transform it into a quilt and began by fixing all the appliques. I secured them going around with the matching color thread and shorter stitches. Then I encountered a problem I couldn’t solve by myself- holes around the edges and especially in the corners: 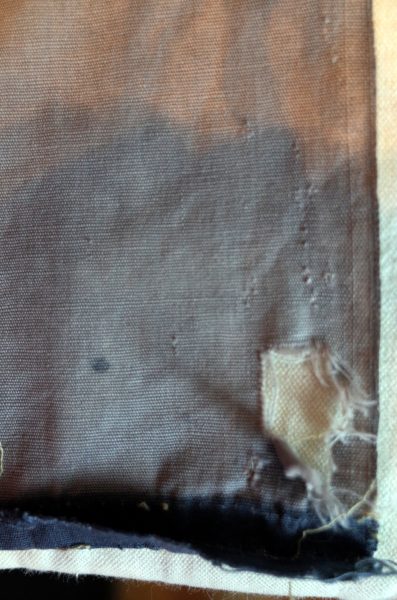 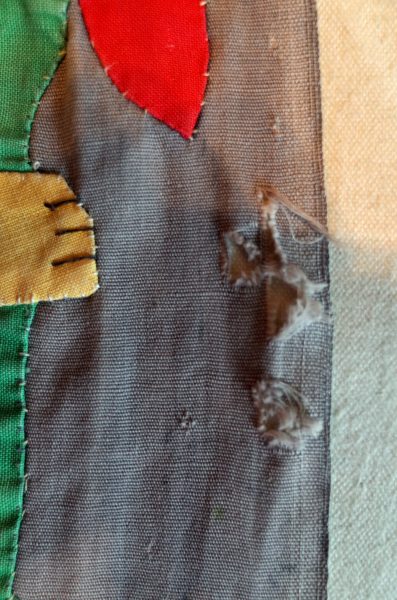 I couldn’t just trim the cloth around because appliques was too close to the edges. I called my friend Daira, who is a textile restaurateur at Rundale Palace and Museum in Latvia.  I picked up my piece and drove there seeking her advice. It was the right time to come. There was a large banner made in 1880 on Daira’s work desk that she was working on fixing holes: 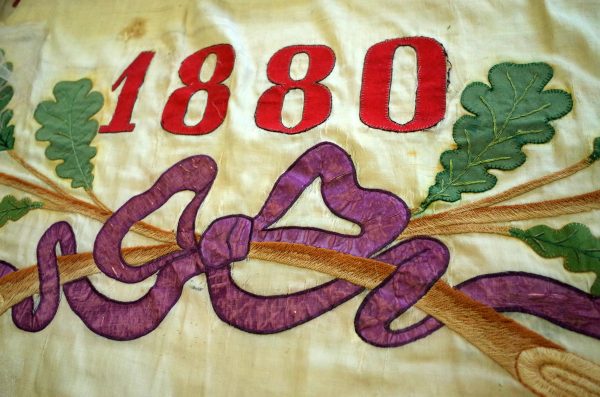 I hurried home and started mending holes. I placed very close color gray fabric behind the holes and stitched through with the matching color thread: 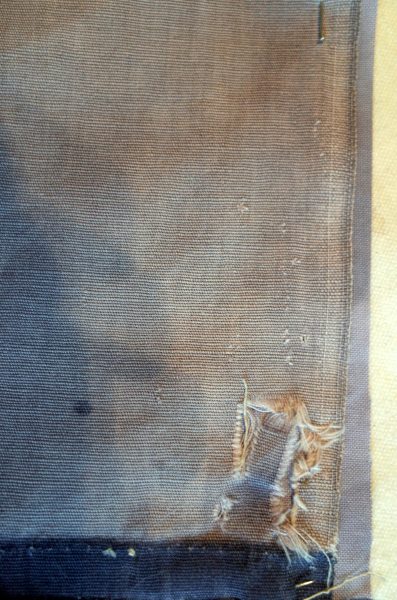 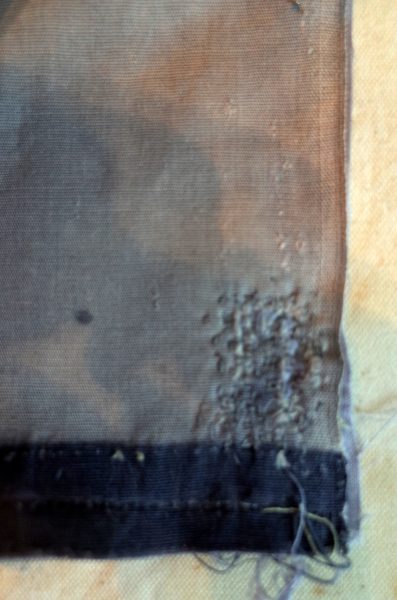 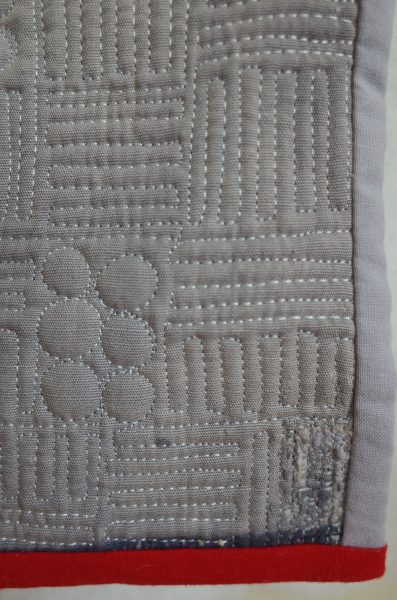 Quilting is always  fun part of quiltmaking for me. I chose a very neutral free motion quilting pattern for a background because I wanted the applique to stand out. I decided to hand stitch all applique parts  with the yarn giving them  more texture. Finally I had it all finished: 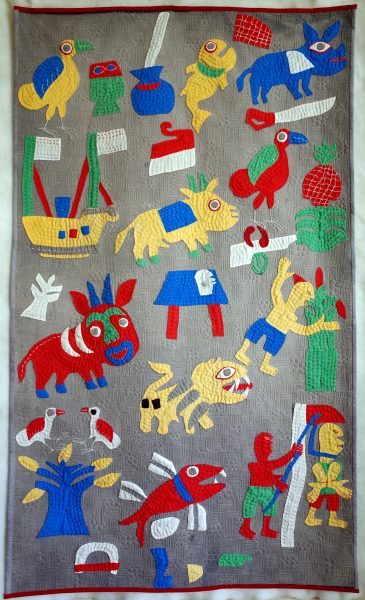 Throughout the history each Fon (king) had special symbols and proverbs associated with his rule. The symbols were used to decorate wall hangings, flags, umbrellas, buildings and other royal items during the rein of the Fon. The Fons were as follows:

Gangnihessou: 1600-1620, the King of Allada and the big brother of the first Fon (king) of Dahomey. Royal Symbols: bird and drum (“The bird spoke so loud that the drum sounded.” And/or “The bird, called Saswé, is known for its greediness. Just like the prince, it will leave nothing to others.”) 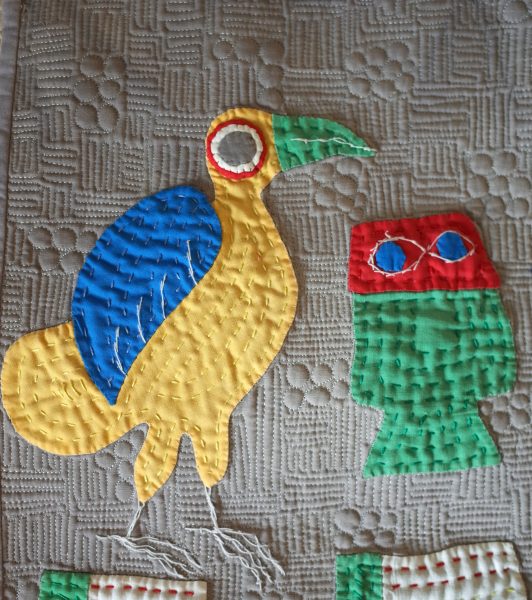 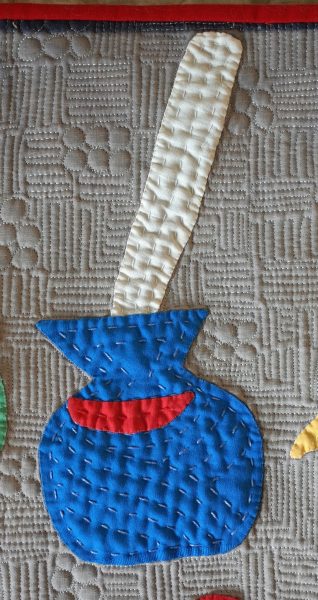 Houegbadja: 1645-1685. Royal Symbols: fish and wicker trap (As a prince, he once avoided a trap which had been set for him. Proverb: “The fish escaped the trap and returned plentifully”.) Houegbadja is the founder of the kingdom of Dahomey and the city of Abomey. 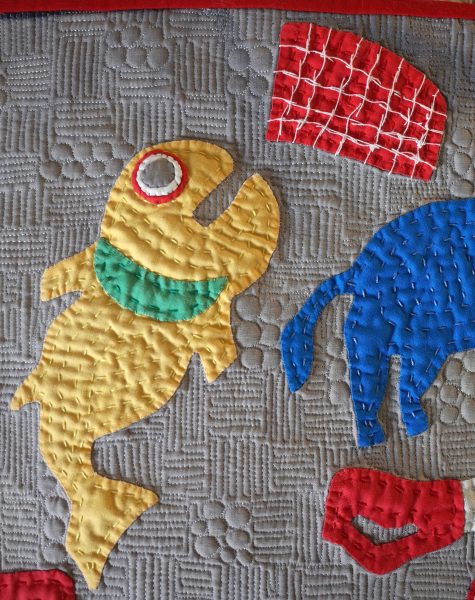 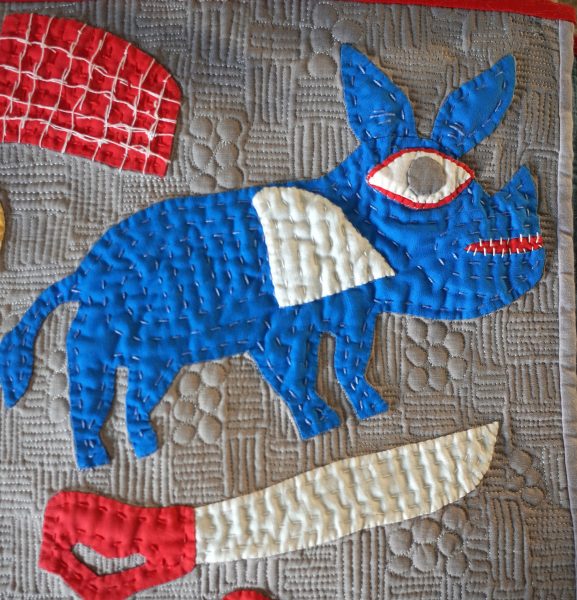 Agadja: 1708-1741  Initially resisted the slave trade, then became a major slaver.  Royal Symbols: boat. It was under his rule that the kingdom came into contact with with the Europeans, who arrived on caravel ships. 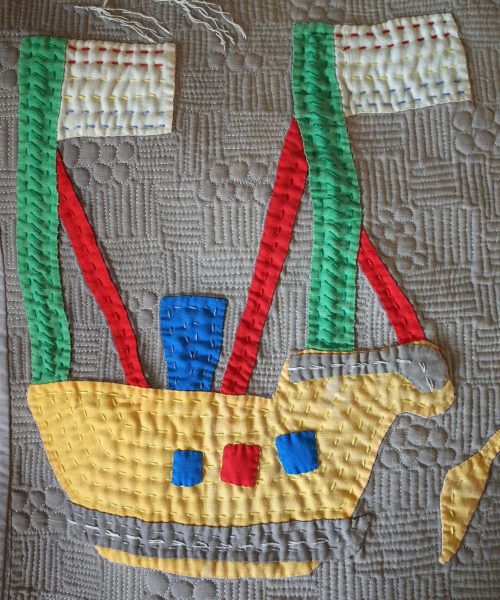 Tegbessou: 1741-1774. Royal Symbols: buffalo wearing a tunic dressed up (“Once the buffalo is dress it is very difficult to undress him.” 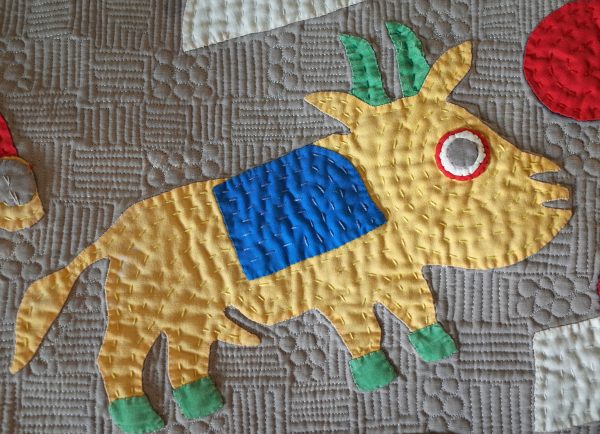 Kpeingla: 1774-1789. Royal Symbols: sparrow and gun, dog defending territory (the stone in the water doesn’t fear the cold.) He strengthened the army and conquered the coastal cities, now located in Nigeria and Togo. He increased Dahomey involvement in the slave trade. Victories and failures marked the path of army which included a corps of Amazons. 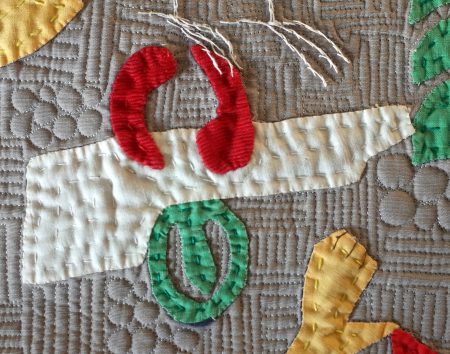 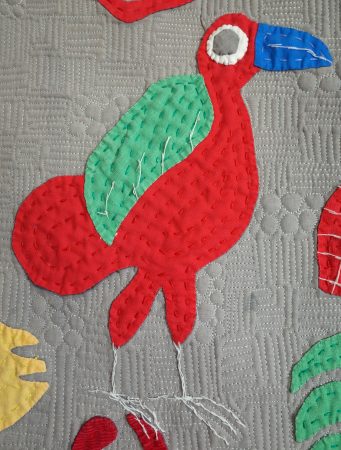 Agonglo: 1789-1797. Royal Symbols: pineapple (Andean fruit) (the thunder hit the palm tree, but the pineapple dodged it). The pineapple, which stands for prudence. He was the first of the Dahomeyan king to marry a European woman.

Ghezo: 1818-1858, 40 years, 40 wars, “killer of elephants”. Royal Symbols: buffalo without dress (the buffalo can go through a town without hitting anything). 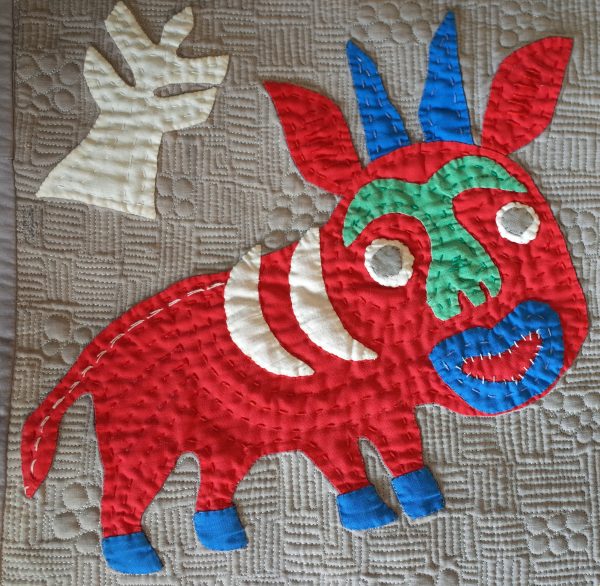 Glele: 1858-1889. Royal Symbols: lion (the teeth of the lion are pushed and feared also). He confronted the interventionism of the Europeans . He developed cultural practices like music, dances and ritual ceremonies. 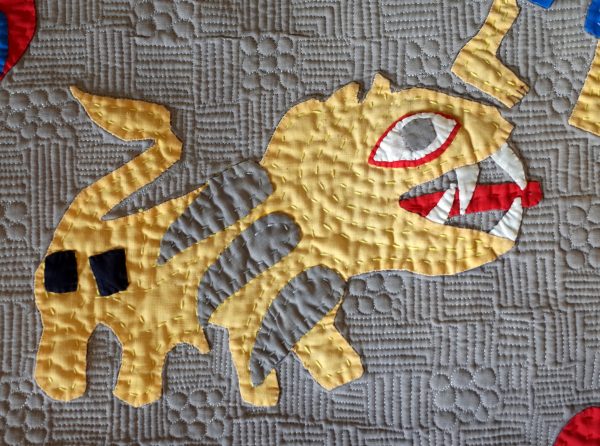 Gbehanzin: 1889-1906, opposed colonial invasion. Exiled by French and died in Algeria. Royal Symbols: shark and egg in hand (the world takes the egg that the land desires) . The proverb: “The world has produced an egg the weight of which can be felt only by the earth”, refers to the fact that much was expected of him when he took over the throne. He was successful in battles against the French, but was finally defeated in 1894. 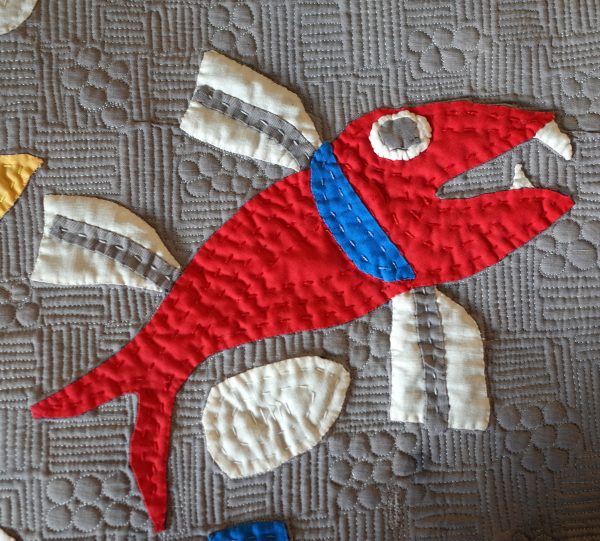 Ago-Li-Agbo: 1894-1900. Enthroned by French and later exiled. Royal Symbols: leg kicking a rock, bow (a symbol of the return to traditional weapons under the new rules established by the colonial administrators), and a broom (Allada stumbles but it does fall.)

But this image still  remains a mystery for me: 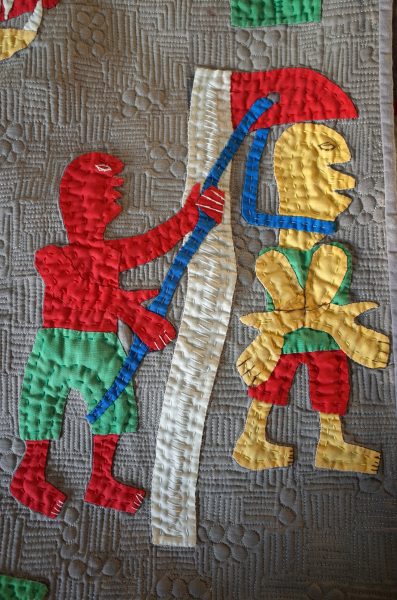 I truly enjoyed working on this piece and I have one more waiting for me to take me to the unknown.